St. Mary‘s Island Church of England School is located on St. Mary‘s Island in close proximity to the Community Centre and Pharmacy. It has a strong Christian ethos and a sense of community.

The school caters for 420 children aged 4-11 years of age; it has fourteen classes arranged to include children of similar ages and key stage year groups.

The School‘s website has been updated and transformed , take a look at the link below.  The website includes the latest inspection Report SIAMS (National Society Statutory of Anglican and Methodist Schools Report dated March 2016) which gives the School an OUTSTANDING  rating.  Also available for viewing is the Ofsted March 2014 report and the latest Ofsted Report dated March 2018 which confirms that a good quality of education has been maintained since 2014.

In October 2015 the developer, Countryside and their company mascot, ‘Bill Ding’ visited the school to talk about staying safe around construction sites.  Countryside has started building the next phase of  new homes on the Island and as a community conscious developer Countryside wants to help the children learn about safety around construction sites.  The Senior Project Manager at Countryside, John Bryant, spoke to the children at the assembly ably assisted by Bill Ding.     The children learnt about hazards and why not to play in building sites.  Pupils and teachers tried on hard hats and high visibility vests and asked the site team questions about the construction work taking place in close proximity to the school.

Mrs Christine Easton, Headteacher, said: “The Bill Ding assembly was interactive, fun and informative.  The children were made aware of the dangers of entering a building site without strict supervision and the correct safety-wear, which they enjoyed trying on.  They also came away from the assembly with a greater awareness of the danger of building sites and the safety measures that are in place for the workforce.  The question  and answer session gave the children the opportunity to find out more about the way in which a site is run and the activity book containing puzzles, colouring in and safety sheets were a fun way to prove what they had learnt.”

The School participated in the Medway Youth Games 2015/16 series and finished in third place overall, just one point behind second place.  The Athletics team came first out of 56 schools  and the Rugby finished 11th out of 52 schools – congratulations to tall those that participated. The School has been accredited with the School Active Mark from Sports England and are keen to promote sport in all its diversity throughout the School.  Each year a sports day is held giving children the opportunity to compete against each other and in teams and successes are celebrated in assemblies.

Update (November 2016) on Mini Youth Games.  More than 40 schools participated in the Mini Youth Games hockey tournament.  Each school played eight games during the competition and three teams were unbeaten.  Consequently, places came down to a goal difference and it was the young players of St. Mary‘s Island Primary School that came out on top.  Congratulations to the team.  The next stage of the tournament is the badminton tournament that takes place at Medway Park, Gillingham on the 24th November 2016.

Some of the children at St Mary’s Island Primary School took part in a Christmas tree decoration competition run by the Rochester Diocesan Board of Education.  We are pleased to announce that Finnley White, Pixie Davies and Jessica Thomas’ entries were successful.

As part of their prize the children and their families spent an afternoon with Bishop James at Bishops court in Rochester.

In January 2017 Medway Council issued a consultation document to all residents on St. Mary’s Island regarding proposals to expand the school to meet the increasing demand for school places in the area; check out Medway Council’s website.   The consultation period will run from Monday 9th January to Sunday 5th February 2017 and responses must be received by Sunday 5th February 2017. Read the Consultation Document.   The document is designed to:

The prescribed alterations are:  ‘Enlargement of the premises’ and ‘Extension of the lower age range’

The proposals will result in the addition of up to 210 places at St. Mary’s Island Primary School to meet expected demand.

Copies of the complete proposal can be obtained from:  Thomas Cogley, Consultation & Intelligence Officer, Level 3, Gun Wharf, Dock Road, Chatham ME4 4TR or you can call 01634 334328 or email: .  The proposals can also be found on Medway Council’s website.

Any person may object or make comments on the proposal by sending them to School Organisation (post bag 75), Level 3, Gun Wharf, Dock Road, Chatham ME4 4TR or by email to .

Really good results; congratulations to all those who participated.  Pictures of the winning teams can be seen on the school’s website.  St. Mary’s Island School finished in first place for the overall series for a second consecutive year and in the MYG Athletics the School finished second out of fifty three schools.

Congratulations to the school who participated in The Big Pedal; they were one of a few local schools that were awarded certificates by Medway Council.  The initiative was to get more children active on the school run by cycling or scooting to and from school.   1,608 schools registered to participate with 513,443 pupils taking part.

During the challenge more than 30% of pupils from the school cycled or scooted to school and in acknowledgement of their efforts Councillor Howard Doe and Councillor Phil Filmer visited the school on Monday 11th June 2018 to present them with a framed certificate.  Congratulations to all those who participated – a great effort!

On Monday 16th July 2018 two classes from the school walked around St. Mary’s Island.  The children were looking at environmental issues and as they walked they collected litter, drew plants and counted the number of cars (there were plenty of those!).

In December 2018 a new raised multi coloured crossing was opened on Island Way West near St. Mary’s Island School to improve road safety.   The crossing was the first of its kind to be installed in Kent.

Following concerns raised by residents and the School, Medway Council launched a competition for pupils to design a colourful crossing to be built near the school. 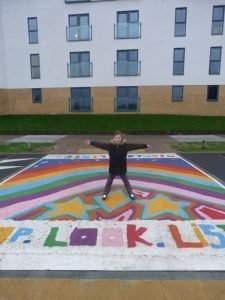 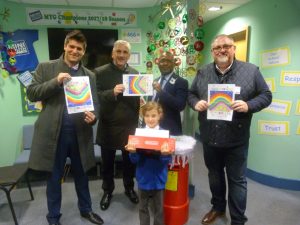 The crossing was paid for by the developer, Countryside Maritime, as part of their ongoing development of St. Mary’s Island.

The final placements for the Medway Youth Games 2018/19 meant that St. Mary’s Island Primary School finished first out of sixty seven schools.  Congratulations to all those involved.

Eleanor Forrest is a support Teacher at St. Mary’s Island School and together with the children writes about Narnia themed week, the school build programme and the Atlas Place time capsule burial.

“Over 5 days we read and discussed C.S Lewis’ ‘The Lion, the Witch and the Wardrobe’. We were very creative making story boxes, drawing and painting, planting seeds…we even created our very own Narnia filled with trees and the lamp, which we got to through a wardrobe! We finished the week by dressing up as characters from the book.

Some comments from the children who took part:

‘I enjoyed dressing up. I came as an ice queen as we were learning about Narnia and there was a queen in the book. I tasted Turkish Delight – I didn’t like it! It was too sweet and powdery.’ Year 1

‘I liked taking pictures of my plant and sowing a seed. We were allowed to take them home and mine has grown lots! I enjoyed listening to the story and then watching parts of the film. We stepped through the wardrobe and listened to the story in Narnia.’ Year 1

‘Some of the activities we did were: we made Narnia scenes in boxes, we read most of the book, we wrote about the characters in the book and how they were like the characters in Genesis. We also made peppermint creams instead of the Turkish Delight in the book. We made boxes for them to go in – we coloured them in like wardrobes! We were allowed to take them home and eat them with our family.’ Year 4

‘I think the week improved our school because more people learnt about storylines, some people read part of the book and that would have made them interested in reading the whole book. It was also good for RE lessons as some people may find RE a bit boring – this made it more fun and would improve their interest in RE and may be would make them want to go to church. I’d love to do more weeks like this so people enjoy RE and learn about the message of God.’ Year 4

‘In year 6 we compared Narnia to the Bible, for example the temptation Edward had in Narnia we compared with Jesus in the desert. We created Narnia scenes of winter and spring using watercolour – I liked mine because the trees looked realistic. We do weeks like this to improve our knowledge and to reflect on our own characteristics.’ Year 6

After months of watching our school change and grow we were able to say goodbye to the builders at the start of March.

‘I think the builders did a brilliant job with it, it seemed relativity quick and I think it looks great. We were quite restricted for a while but now we’ve got the whole playground back it’s good being with all the year groups again at break.’ Year 6

‘The builders have done it in a way so that none of the children have been affected. They have tried to stay out of the way so it hasn’t impacted us and no one got hurt.’ Year 6

‘I like the way they’ve done it so quickly. It looks a lot better than it did before – we have so much more space. We’re all back together at break and we’re straight out onto the playground. It’s been quick!’ Year 5

Optivo, who manage Atlas Place, invited members of our school to add items to go in a time capsule to be buried in the grounds of the scheme that would be opened again in 50 years’ time! A session was held in our school for the children to answer a short questionnaire, draw what they thought a house would be like in 50 years’ time and for them to request an item that would be added to the capsule. The items varied from a school tie, a newspaper from the day and Lego! We then went over to Atlas Place to bury the items.

‘I put Lego in the time capsule to show people in 50 years’ time what we played with. I think it’s a good idea having links with older people because they want company and hopefully we can visit and give them company. The time capsule burial is not something you do every day so we were all excited.’ Year 6

‘I put a red nose in the time capsule as it shows people how much we cared about people who are less fortunate than us. In 50 years’ time when we open the time capsule I’ll probably think the nose is something we wore all the time! I was really excited about going to Atlas Place to represent our school.’ Year 4

‘It will be nice to link with older people by communicating with them and helping them. I’ve watched Atlas Place being built and it felt ecstatic seeing the inside as I didn’t think I’d be able to go in until I was old! When I put my object in the time capsule, which was a fashion magazine, it felt good because in 50 years’ time I’ll be able to see what types of clothes I wore.’ Year 3.

What's happening in Chatham Maritime?
Sign up for our weekly newsletter the Friday Flyer!
Read out latest newsletter